Diagramming Astronomy in the Divina Commedia (2020)

The goal of this project is to bring clarity to some of the most seemingly thorny and complex passages in the Divina Commedia: those that deal with astronomical and astrological matters. In his 1903 Studies in Dante, Edward Moore wrote, “[i]t is a matter of regret that even students of ability and culture often refuse so much as to attempt to understand Dante’s astronomical references. They assume either that they are not to be understood at all, or at least not without special astronomical and mathematical training” (p. 1). Despite the many great studies that treat the use of astronomy and astrology in the Commedia, Moore’s comment still rings true. The difficulty that readers perceive in grasping Dante’s astronomical references is due to several factors, all of which serve to distance the contemporary reader of the Commedia from the poet.

For starters, the language of medieval astronomy is intricate, technical, and dense, requiring that a reader first define many key terms before attempting to grasp the literal level of the discourse. Further, Dante saw the cosmos through a Ptolemaic lens, where the Earth was located at the fixed center of the universe. Readers today see the cosmos through a Copernican lens, thus heliocentric and with a rotating Earth. In Dante’s time, astronomy and astrology comprised the final liberal art of the quadrivium, making it a commonplace of intellectual and academic life, whereas most readers of Dante today tend not to equivalently study astronomy or physics. And, lastly, Dante’s world was not riddled with artificial lights and mechanic clocks. The movement of the heavens was bright and visible every night from anywhere on the planet, and the motion of the Sun was the way to keep time during the day. To observe the cosmos in the same unimpeded manner today, one must specifically seek out a designated dark-sky zone. In short, the moving sky was a more present component of daily life in Dante’s time than it is in ours.

The amalgamation of these factors creates distance between contemporary readers of Dante and the text itself. That said, this distance is by no means insurmountable. With clear and concise diagrams accompanied by close exegeses of relevant verses of the Commedia, I hope to help shorten this distance between reader and text. I begin with a quick overview of the tenets of Ptolemaic cosmology, and then address the sections of the Commedia that feature astronomical or astrological references. As Richard Kay, among others, has pointed out, the distinction between the terms astronomy and astrology is less concrete for Dante than it is for us (p. 1, notes 1-3). Additionally, medieval thinkers did not tend to regard the latter skeptically as a pseudo-science, which is more or less the norm today. For this reason, very frequently I will address both astronomy and astrology in order to adequately treat the text. 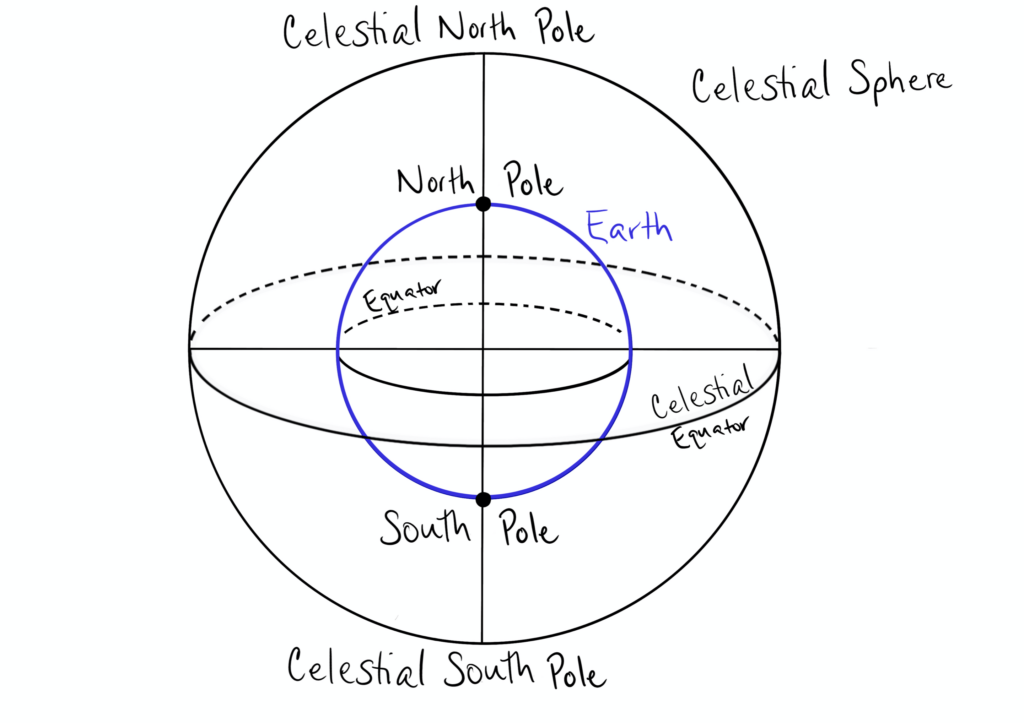 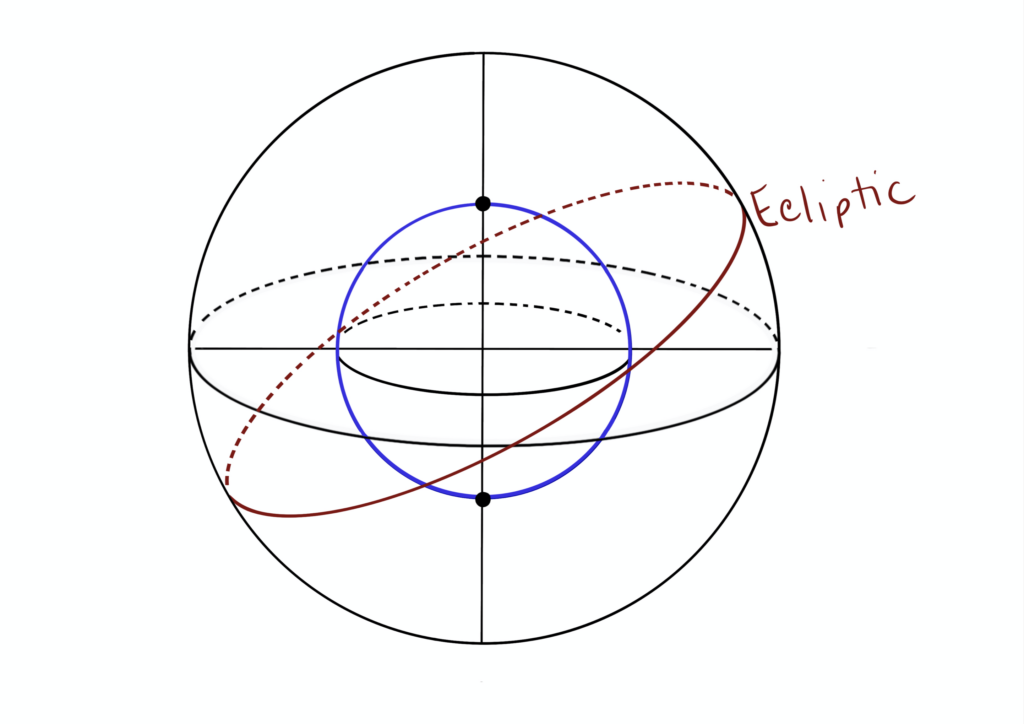 The “wandering stars” – i.e. the Moon, Mercury, Venus, the Sun, Mars, Jupiter, and Saturn – all appear to travel along one single line, referred to as the Ecliptic. The Ecliptic is the line in the sky that encompasses all of the constellations of the Zodiac, or the “fixed stars.” The Sun, for example, travels the entire Ecliptic in a calendar year. Each of the wandering stars takes a different amount of time to travel the entirety of the Ecliptic. The Moon is the fastest, and Saturn the slowest. 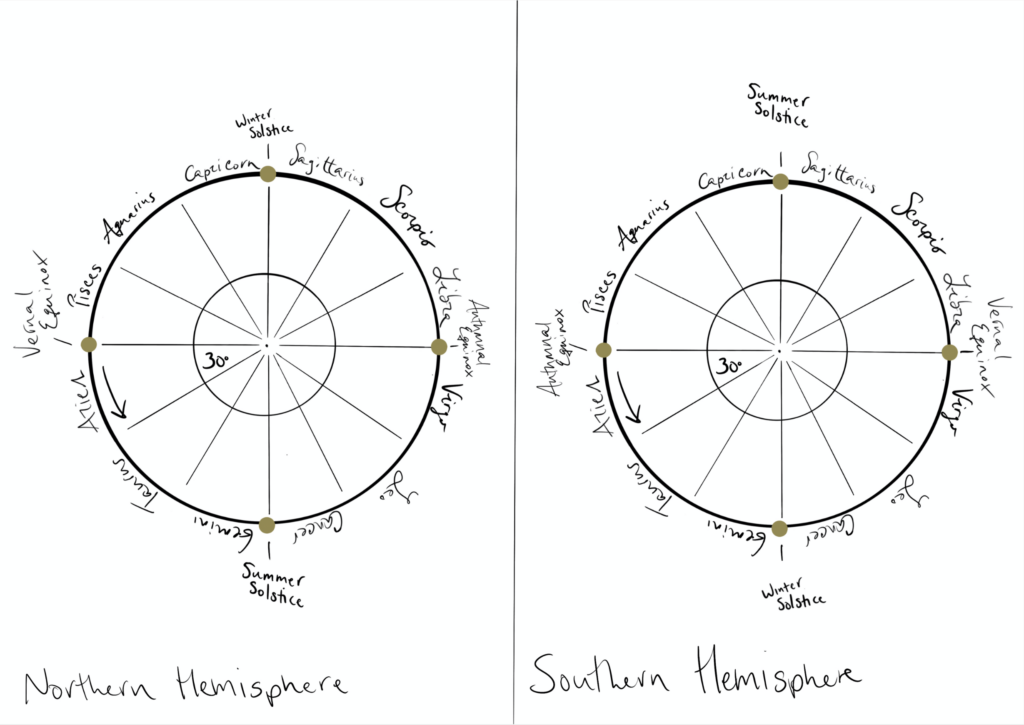 This is one way of thinking about how the wandering stars move along the Ecliptic.

The Ecliptic is a circle, and thus contains 360 degrees. There are twelve constellations in the Zodiac. In order, they are: Aries, Taurus, Gemini, Cancer, Leo, Virgo, Libra, Scorpio, Sagittarius, Capricorn, Aquarius, Pisces. Each constellation makes up approximately 30 degrees of the circle. The constellations in bold represent what are called the “cardinal signs.” When the Sun appears to enter into one of the cardinal signs, we mark the change of a season on Earth: for the northern hemisphere, Aries is the start of Spring, Cancer the start of summer, Libra the start of Fall, and Capricorn the start of winter.

From the perspective of the southern hemisphere, the first point of Aries represents the autumnal equinox, and the seasons are precisely opposite. 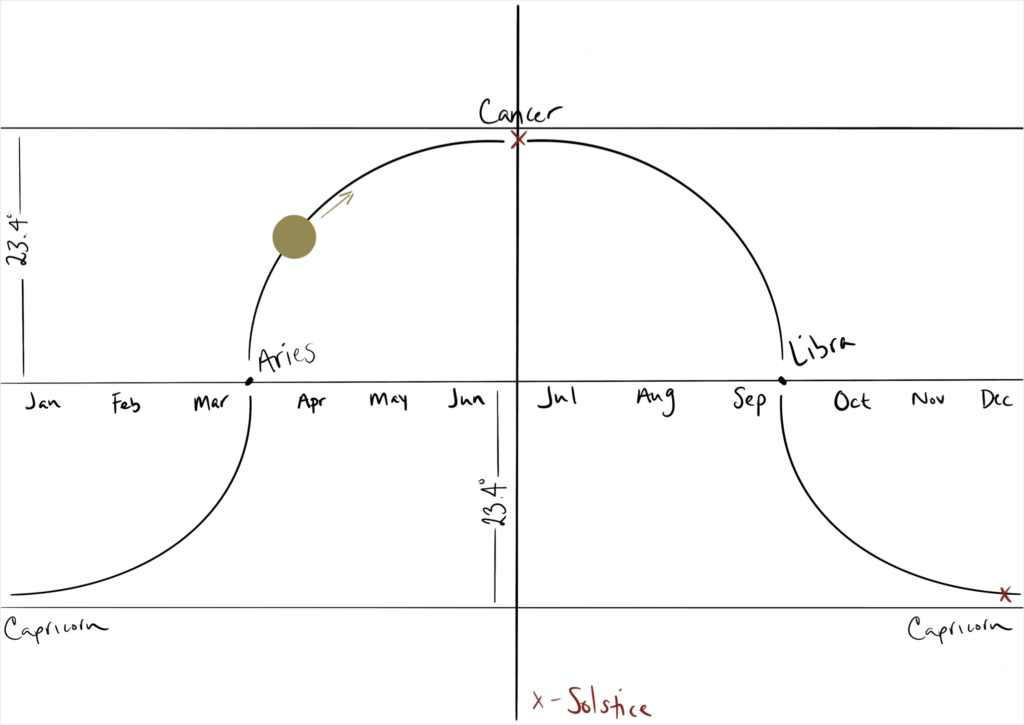 This is another way of thinking about the movement of the Sun across the Ecliptic.

Six of the constellations are located in the northern hemisphere: Aries, Taurus, Gemini, Cancer, Leo, and Virgo; and six in the southern hemisphere: Libra, Scorpio, Sagittarius, Capricorn, Aquarius, and Pisces.

While the movement of the Sun along this path is more obvious to us because of the attendant changes in temperature, all of the wandering stars move across this line in roughly the same manner.  There are two main differences in the movement of wandering stars: the amount of time it takes for a planet to complete one cycle (the Moon moves from one sign to the next every 2.5 days; the Sun moves from one sign to the next once a month; Saturn moves into a new sign every 2.5 years), and the retrogrades. Mercury, Venus, Mars, Jupiter, and Saturn all “station retrograde” periodically, during which time they appear to move backwards (hence “retro-gradus”) along the Ecliptic before then “stationing direct” again. Note that station is the verb traditionally used to indicate retrograde and direct motion.

A note on the terminology “fixed stars” versus “wandering stars” from Plato’s Timaeus, Isidore’s Etymologia, and Dante’s Convivio

The distinction of “wandering” versus “fixed” stars is common terminology used by astrologers and astronomers in the medieval period. Accordingly, Dante will use the terms pianeta and stelle fisse in reference to these entities in the cosmos. In English, the best rendering of these two terms is “wandering stars” and “fixed stars,” respectively, since the English “planet,” to modern readers of Dante, will implicitly exclude the Sun and the Moon.

Fundamentally, the term “wandering star” is a reference to the unique motion of the seven objects in our solar system which move along the Ecliptic: the Moon, Mercury, Venus, the Sun, Mars, Jupiter, and Saturn. These are understood in contrast with the constellations, which remain fixed in the background on the celestial sphere as the planets “wander.” The distinction originates with the Greek philosophers, who called the stars that moved along the Ecliptic πλανήτης or “wandering ones,” which, in Latin, later became planetae.

In Plato’s Timaeus, which Dante will reference in Paradiso 4, these two distinct kinds of movement are addressed at some length as Timaeus recounts the story of the creation of the universe.

Next, he [the creator of the universe] sliced this entire compound in two along its length, joined the two halves together center to center like an X, and bent them back in a circle, attaching each half to itself end to end and to the ends of the other half at the point opposite to the one where they had been joined together. He then included them in that motion which revolves in the same place without variation, and began to make the one the outer, and the other the inner circle. And he decreed that the outer movement should be the movement of the Same, while the inner one should be that of the Different. […] and he made the revolution of the Same, i.e. the uniform, the dominant one in that he left this one alone undivided, while he divided the inner one six times, to make seven unequal circles. (36c-d)

Here, Timaeus’s terminology, “the movement of the Same,” accords to the rotation of the heavens about the celestial axis, or the way that the Sun and the other stars appear to rise and set over the line of the horizon on a daily basis. On the other hand, “[the movement] of the Different,” is a reference to the varied movement of all the wandering stars along the Ecliptic. Indeed, the description of the fashioning of a shape that resembles an X with the ends bent back and attached in circles is precisely the manner in which astrologers and astronomers depict the lines of the equator and the Ecliptic in the Ptolemaic system (see diagram for Inferno 1 for a visual representation of this).

Such was the reason, then, such the god’s design for the coming to be of time, that he brought into being the Sun, the Moon, and five other stars, for the begetting of time. These are called “wanderers,” (πλανητά) and they came to be in order to set the limits to and stand guard over the numbers of time. When god had finished making a body for each of them, he placed them into the orbits traced by the period of the Different—seven bodies in seven orbits. (38c-d)

The language in the Timaeus addresses the dual movement of the heavens as that of sameness and difference: “the movement of the Same” is the diurnal motion about the celestial axis, which is shared by everything in the sky, while “[the movement] of the Different” is the movement of the seven wandering stars along the line of the Ecliptic. As Timaeus serves to underscore, linguistically speaking, the Greek term πλανήτης is a reference to the unique movement observed in the motion of these particular seven stars in the sky (cf. Liddel, πλανάω, “to make to wander, lead wandering about” or, when passive, “to wander, to roam about, stray”).

Dante did not read Greek, however. To trace how the terminology reaches Dante, we can consult Isidore, who, in Book III of the Etymologiae, expands on the concept:

[The philosophers have proposed seven heavens belonging to the universe, that is, seven planets, from the coordinated motion of their spheres. They hold that everything is connected to the orbital paths of these planets, and they think that the planets are interconnected and in a way inserted within one another, and that they turn backwards and are carried by a motion that is opposite to the other heavenly bodies. (Barney, et al. translation)]

[Certain stars are called planets, that is, ‘wandering ones,’ because they range through the entire cosmos with a varying motion. It is because of their wandering that they are called retrograde, or are rendered irregular when they add or subtract orbital degrees. (Barney, et al. translation)]

The Latin planetas, as Isidore underscores, is a term derived from the Greek philosophic tradition.Thus, the “wandering” exhibited by the seven “planets” is the characteristic that distinguishes them from all the other stars in the sky, which sit still, or “fixed,” on the backdrop of the celestial sphere. In summation: every light in the sky shares in what Timaeus calls “the movement of the Same,” but only the planetae exhibit the movement of “the Different.” This distinction in the motion of the stars is what will ultimately lead Dante, among others, to posit the manifold spheres that comprise the physical cosmos and develop the cosmological system that grounds the entirety of Paradiso.

Dante in the Convivio will refer to the constellations as le stelle fisse (cf. 2.3.3 and 2.14.7). Accordingly, he will at times use the term pianeta, meaning a star which wanders (2.13.7 and 2.13.28), when treating the “planets,” while at other times he will refer to them simply as “stella”—as in “la stella di Venere” (2.2.1); “la stella di Marte” (2.13.22); or “Giove è stella di temperata complessione” (2.13.25). Throughout the Commedia, as we will see, he employs the same terminology: stelle fisse for the fixed stars, and pianeta or stella for the wandering stars. Dante does not, however, use the term “stella errante” or any such terminology. I use this terminology in English to make it clear that the Sun and the Moon are included in the medieval discourse on planets, despite the fact that today we do not consider them to be such.