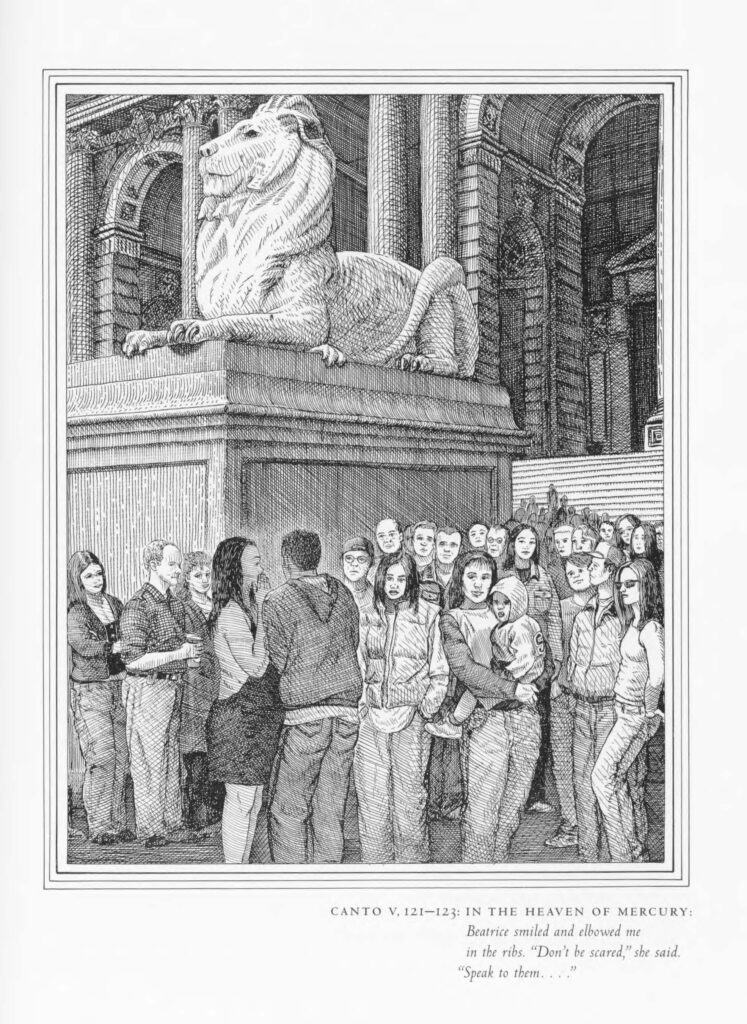 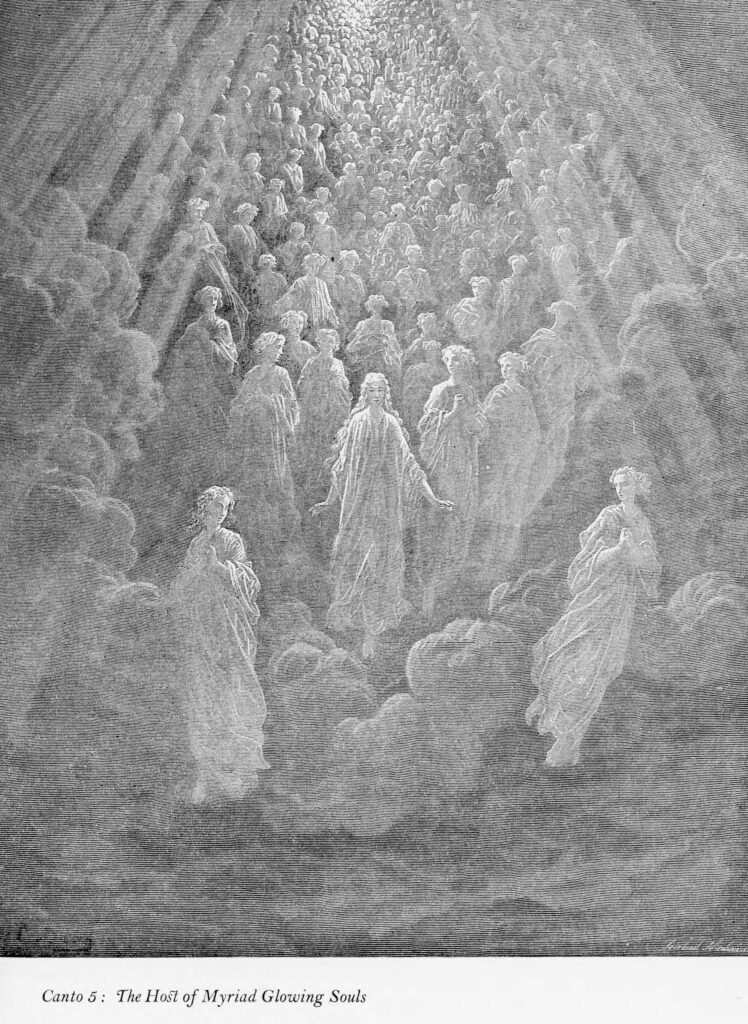 The Paradiso illustrations for which Birk had no precursor in Doré’s engravings largely emphasize the doubts, thoughts, and meditations of the pilgrim as he travels through the city with his interlocutor, Beatrice. Birk portrays this journey as a secular, spiritual journey into the soul by emphasizing the existence of the individual who journeys through cities as he journeys into himself. The souls of heaven are attentive and contemplative with a strong sense of community, as can be seen in the illustration of the Sphere of Mercury, which is entirely different from the Doré; here, the fame-seekers crowd under one of the lions in front of the New York Public Library (Par. 5). Unlike the anguished expressions and supine figures of the souls in Inferno and Purgatorio, the literally and figuratively upright souls of Paradiso engage in conversations with the pilgrim, with each other, and, in a certain sense, with the spectator as well. The souls of Birk’s Paradise, such as those here in Paradiso 5, gaze out toward the spectator, inviting him, one could hypothesize, into the interior dialogue initiated by the pilgrim during his journey about how one makes sense of the afterlife on earth. 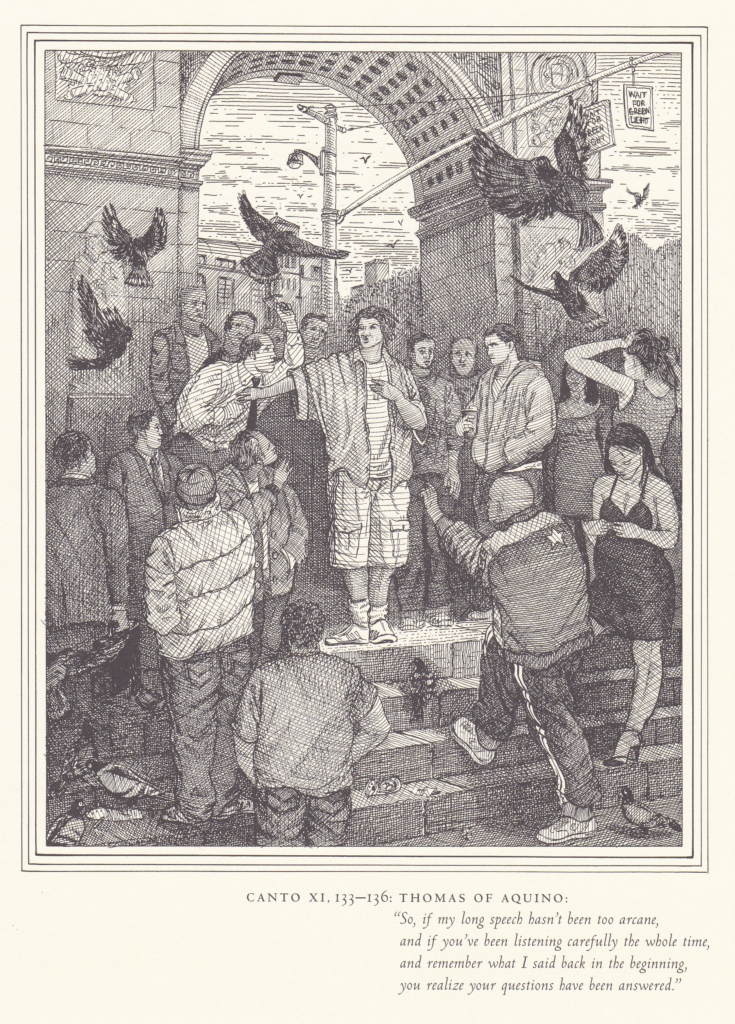 Birk repeatedly represents Thomas Aquinas in the Sphere of the Sun, here depicted as a dreadlocked young man wearing cargo shorts and a large crucifix as he seems to pontificate from his soapbox at Washington Square Park to an attentive group of onlookers and pigeons (Par. 10, 11, 13). As in the case of his depiction of Charles Martel (Par. 8), who appears as a homeless Gulf War Veteran with a KFC bucket on his head, Birk largely figures Dante’s interlocutors as individuals whom one would meet on the streets and in the public meeting areas (such as parks) of New York City. 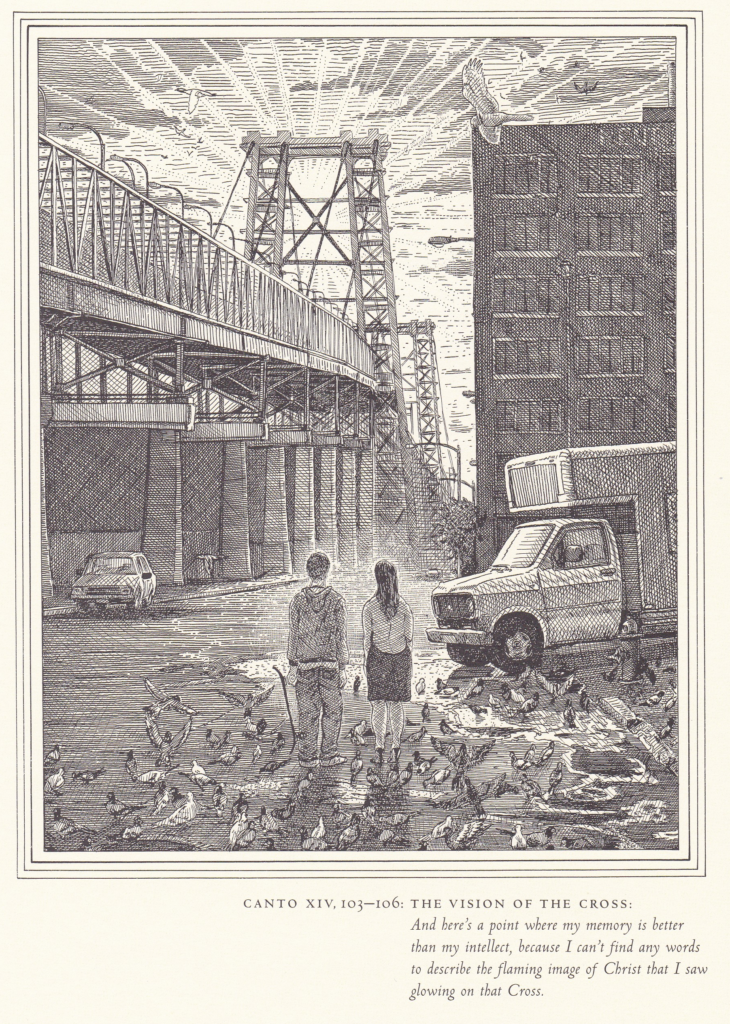 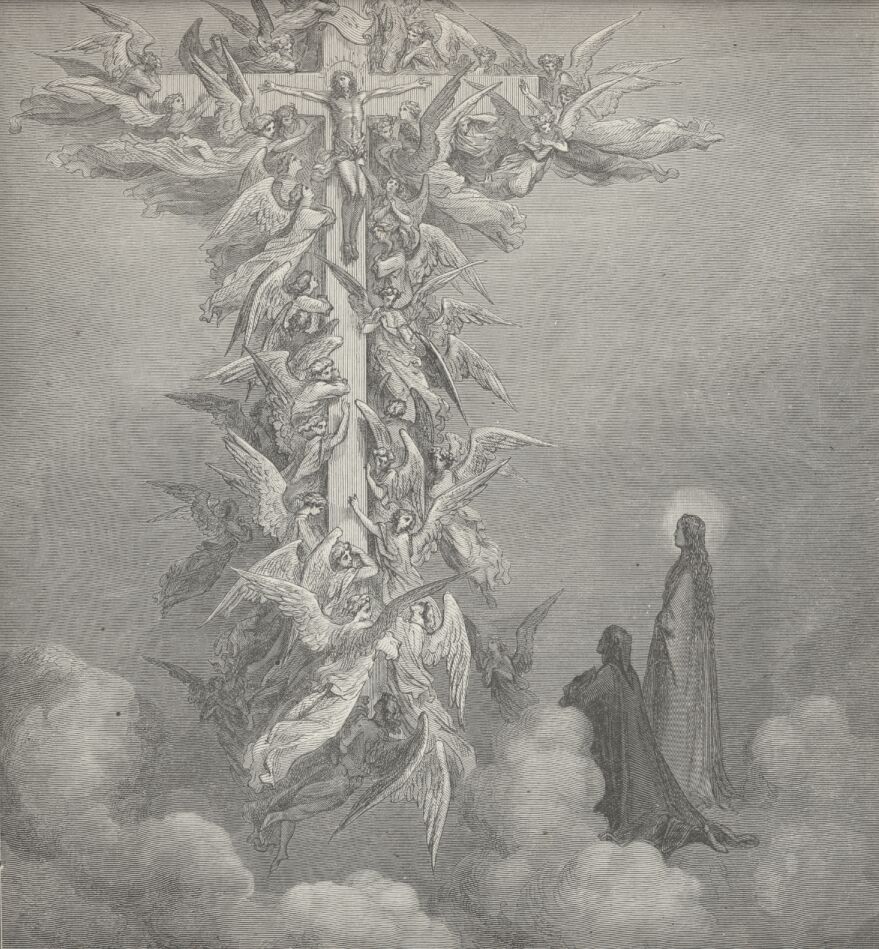 The thirty-four illustrations in the third canticle – which outnumber those completed by Doré for his Paradise – recount the subdued conversations that take place between Dante, Beatrice, and the blessed souls they encounter, though here they take place along the streets of Manhattan and the outer boroughs. There are scenes in front of closed store shutters and along fire escapes, in front of liquor stores, outside the airport, at the New York Public Library, near diverse subway stations and on the subway itself, under the Brooklyn Bridge, with the throngs of souls in Washington Square Park, in a quiet Grand Central Station, gesturing towards Atlas in Rockefeller Center, observing the hanging spheres in the Planetarium, and so on. Birk has chosen to illustrate these moments of interior and conversational dialogue more than Doré, diverging from Doré’s grandiose depictions of the heavenly masses. A comparison of the proportion of illustrations that feature Dante and Beatrice with some or no other pedestrians in the background versus the number of illustrations populated with the large crowds of the blessed reveals this asymmetry: of the thirty full-page illustrations, merely seven of them feature large crowds. Compare this with Doré’s eighteen illustrations of Paradise, of which fifteen feature Dante and Beatrice together with a large number of souls and/or angels.

In charting this journey, Birk largely eliminates Christian (but not other) religious symbols and emphasizes the urban landscape instead. For example, the radiant splendor of the Williamsburg Bridge, with its intersecting (or, “crisscrossing”) truss structure, is the vision of the cross itself. 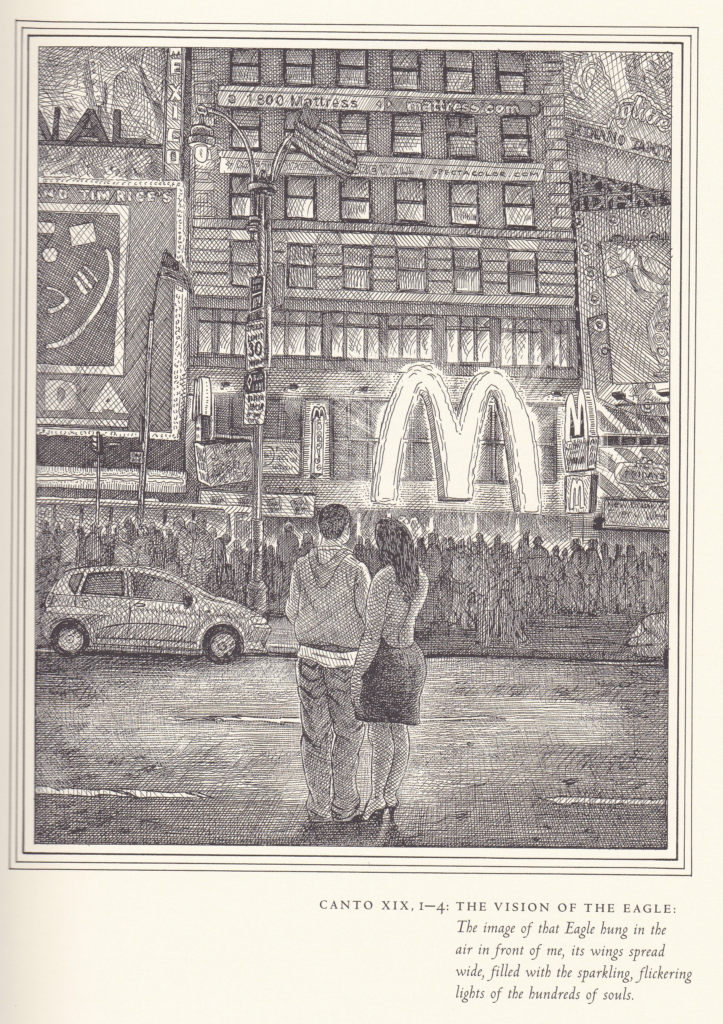 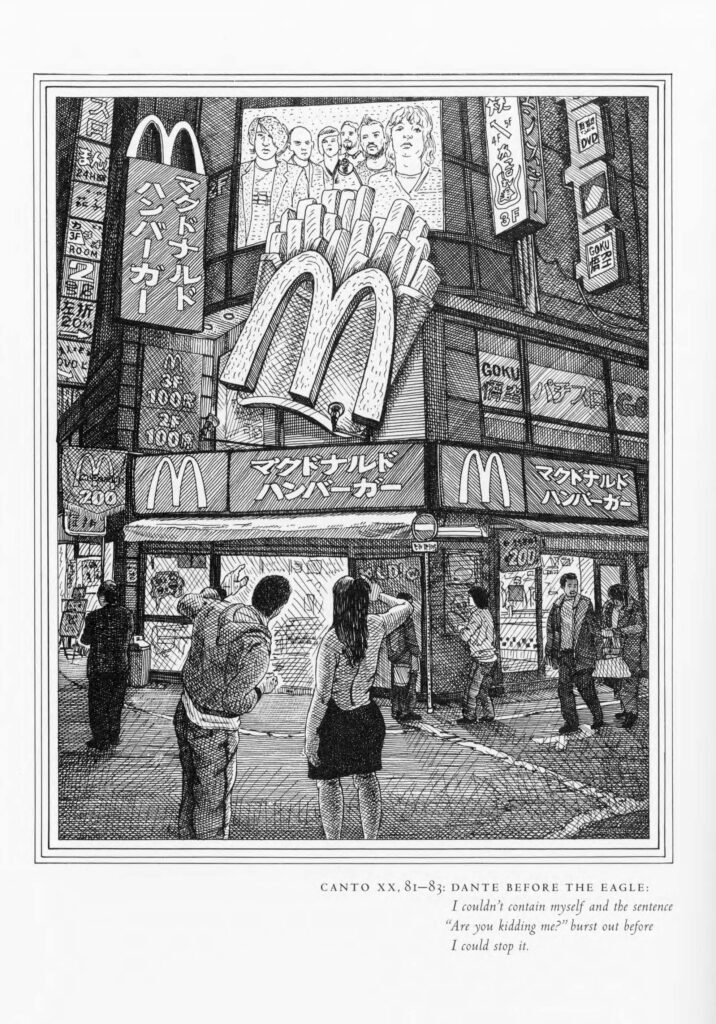 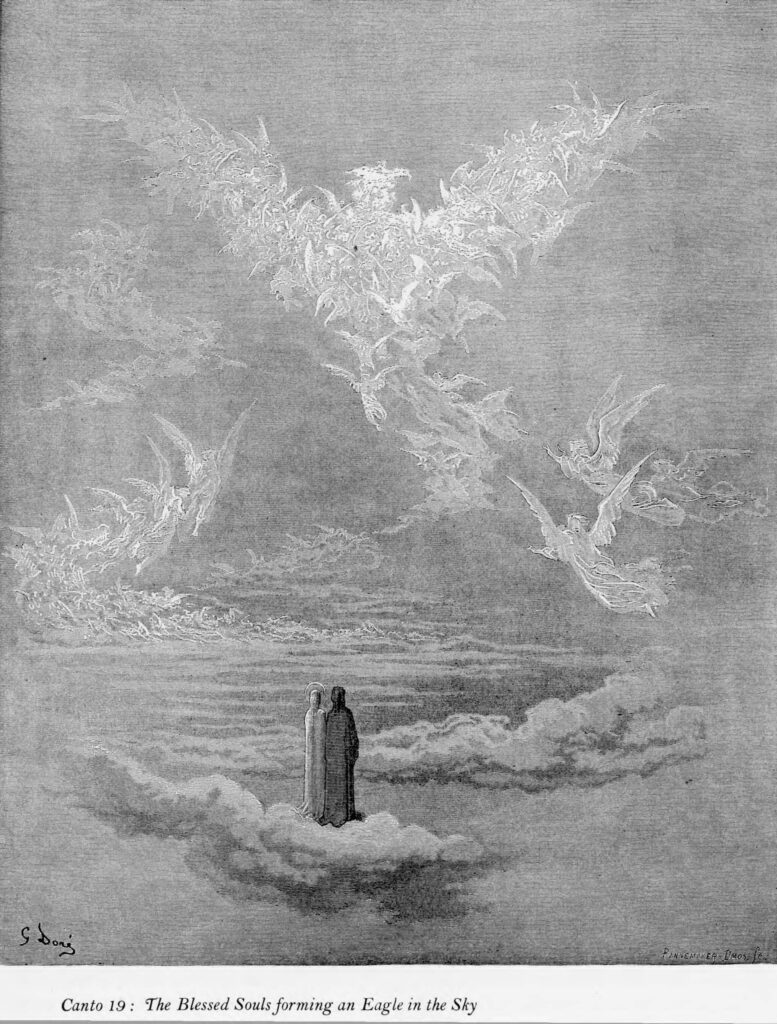 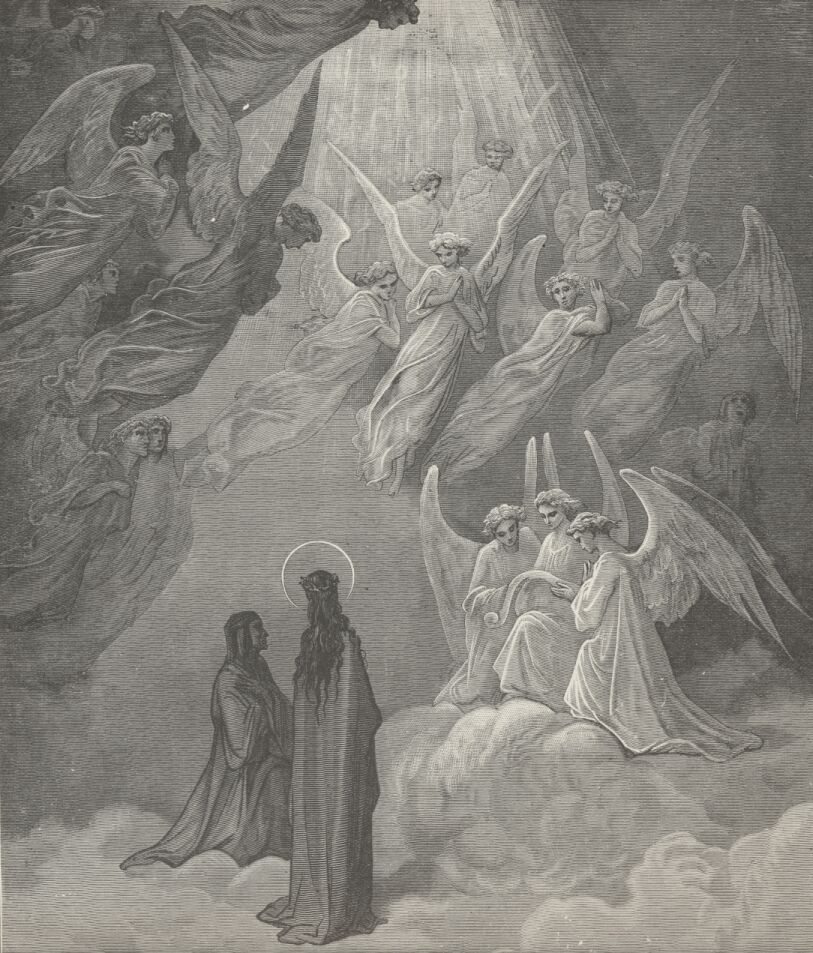 How the pilgrim makes sense of the postmodern afterlife, of being a spiritual individual surrounded by the signs of global commerce, which forms the critique initiated in Birk’s Inferno, returns here in a lesser degree but replete with the biting sarcasm of his wit. The eagle of Justice in his illustrations of Paradiso 19 and 20 are two different glowing “M”s of a McDonald’s marquee: one in Times Square (where Birk also inserts an advertisement for Dante’s Inferno), and another, suddenly, in Tokyo, Japan. There is a final irony in this visual analogy, whereby the “M” of the largest American fast-food empire, so to speak, reproduces the shape of the imperial eagle of the Sphere of Jupiter. This global, American empire seems more omnipresent than any other political structure. 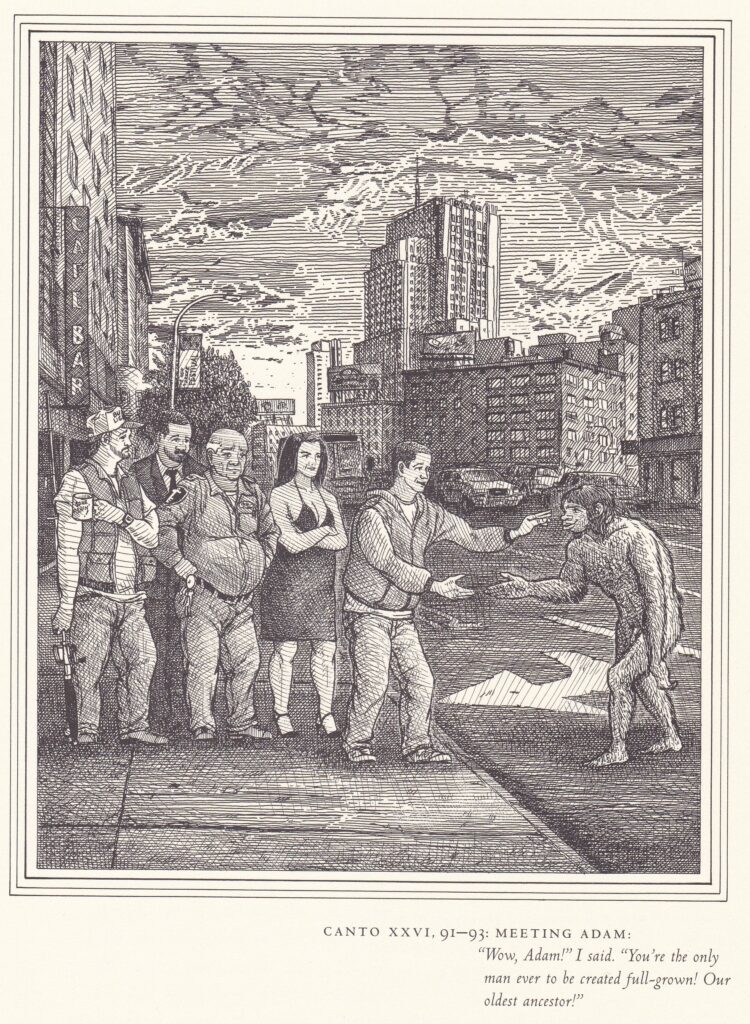 If the empires of commercialism have staked their claim in Birk’s Paradiso, the same cannot be said for a Christian theological framework. As with Birk’s substitution of pigeons for angels, he endeavors not to let a Christian understanding of his vision dominate this canticle. Swapping the Gates of Purgatory for a Hindu temple is one example of that effort. Yet another would be the depiction of Adam as an ape, who crosses the street with his hand outstretched to meet Dante, Beatrice, James, John and Peter (Par. 26). The ancestor of humanity, the first to be created by the “prima virtù,” or, the “Primal Force,” is himself a primate. A Darwinian theory of evolution has supplanted not only Scripture, but most forms of Creationism. 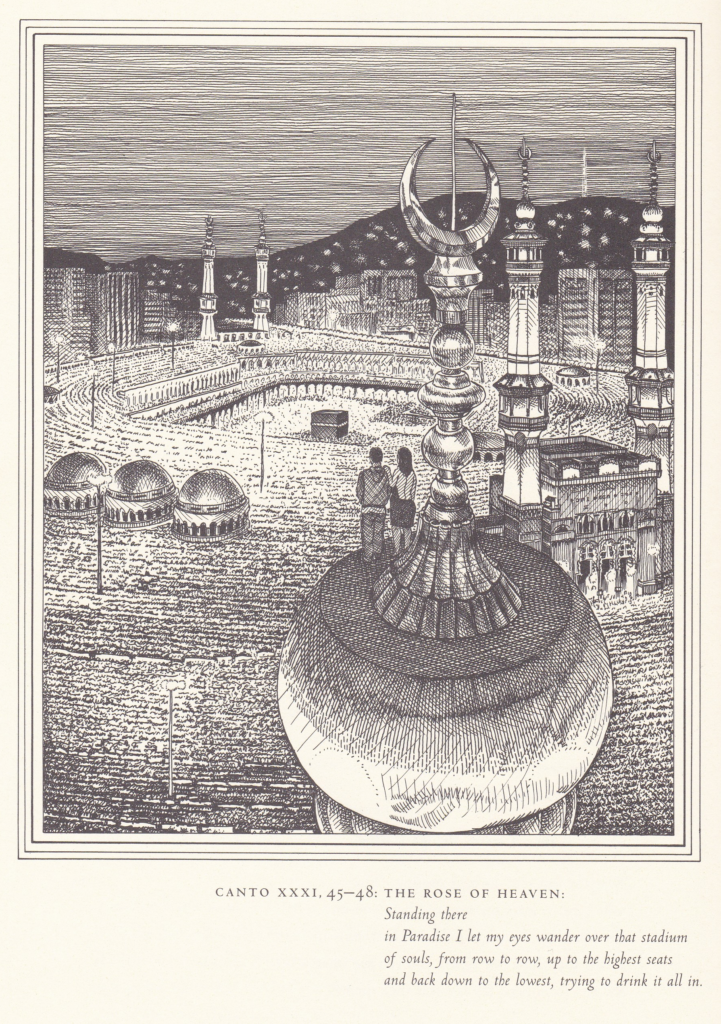 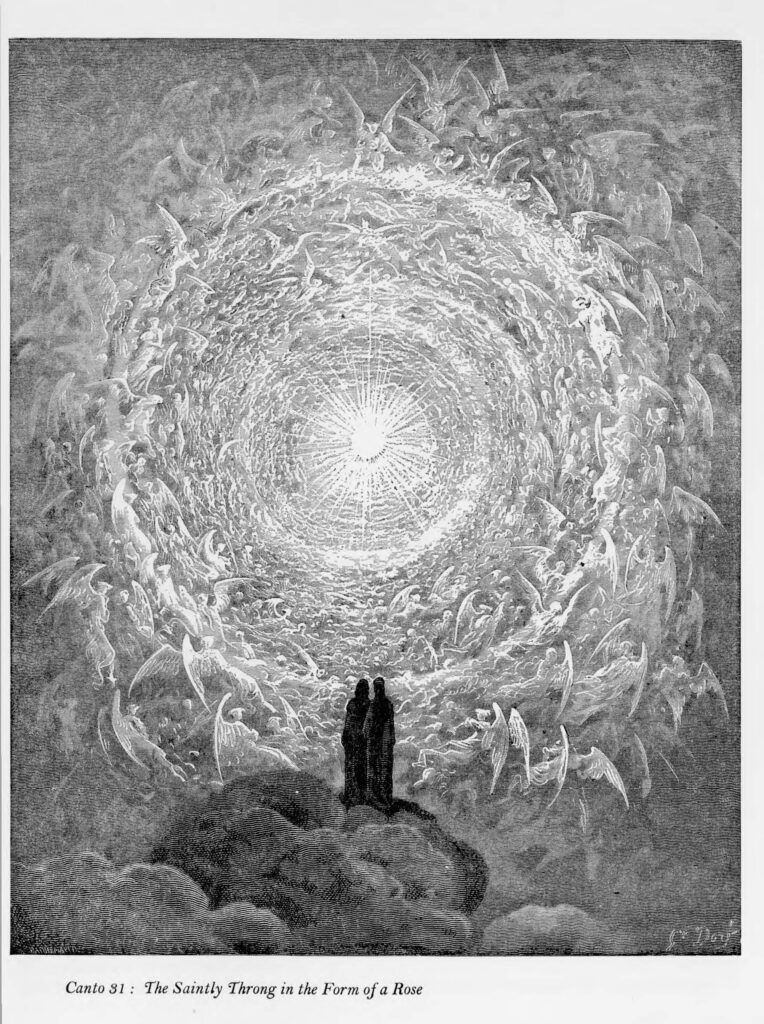 The Celestial Rose appears in Birk’s illustration of Paradiso 31 as Kaaba, the black stone at the center of Mecca, whose numerous concentric circles evoke the design of the Celestial Rose in Dante’s poem. Previously, in the frontispiece to Paradiso 30, a highway sign for the road to Mecca designates in English and Arabic one lane for “Moslems Only” and the other for “Non-Moslems.” The Empyrean is the land of Islam, not of Christianity.  Yet again, lest any religion dominate the heavenly afterlife, the frontispiece to the following canto (Par. 31), is a billboard for McDonald’s with lettering in Arabic. Not even Islam is stronger than the global forces of capitalism.

By featuring Islam and Hinduism at the center of Paradise, Birk also highlights the omnipresence of ethnic pluralities in a postmodern, American urban existence. I would not see this as a refutation or a revision of the treatment of other faiths by Dante in the Commedia, if one tends to view Dante’s regard for Islam, for example, in exclusionary terms. As Barolini states, there exists a correlation between “the embrace of difference in the metaphysical domain […] in the Paradiso and Dante’s many startlingly non-normative postures in the social and historical sphere.” Thus, Birk’s inclusion of other faiths might seem more harmonious with Dante’s vision than might be taken for granted. 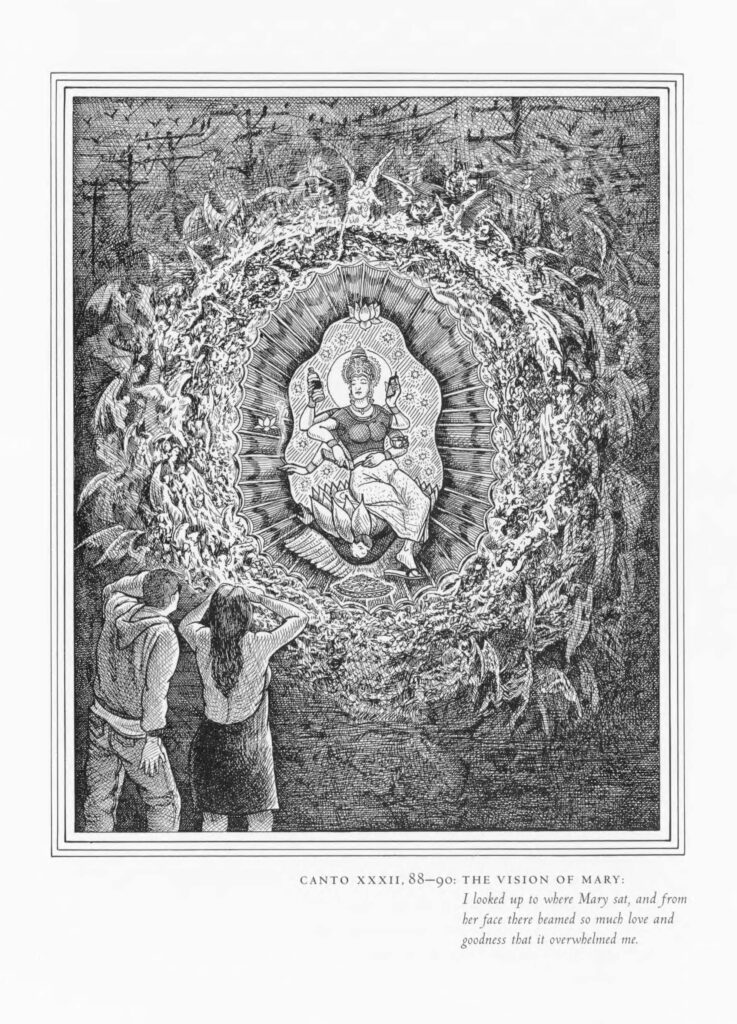 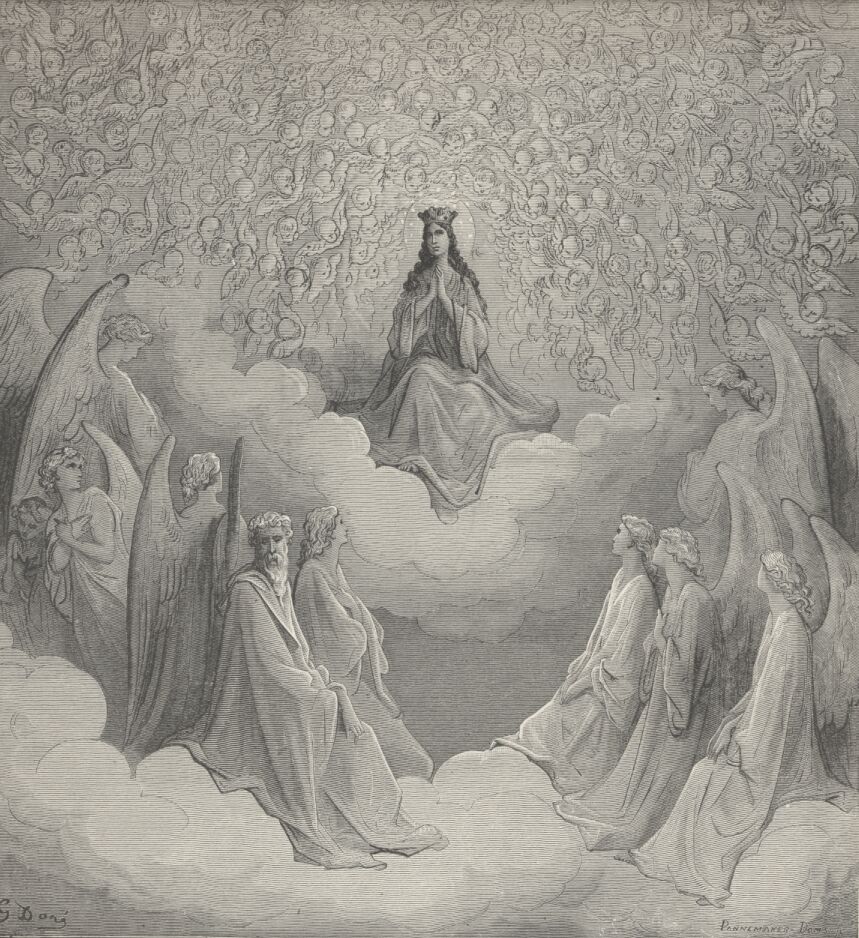 Christian iconography all but disappears from this canticle, replaced by statues of Buddha (frontispiece to Par. 11), a depiction of the Hindu god Vishnu (frontispiece to Par. 23), and Aztec art (frontispiece to Par. 33). But most surprising is the inclusion of Hinduism and Islam in the Celestial Rose itself, as noted for his illustration of the Celestial Rose (Par. 31). Here, the Virgin Mary is replaced by a Hindu goddess (Sarasvati) but in her hands she bears bottled water, a remote control, a cell phone and a cigarette, instead of the books and musical instruments that she is often depicted carrying.