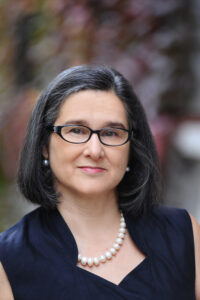 Teodolinda Barolini is Lorenzo da Ponte Professor of Italian at Columbia University and Editor-in-Chief of Digital Dante. Her research focuses on thirteenth- and fourteenth-century Italian literary culture, its relation to classical antiquity, and its reception through the centuries to our own day. She has written widely on Dante, Petrarch, Boccaccio, and the medieval lyric. Dante’s Poets: Textuality and Truth in the ‘Comedy’ (Princeton, 1984) is her first book; it won the Marraro Prize of the Modern Language Association and the John Nicholas Brown Prize of the Medieval Academy, and was translated into Italian as Il miglior fabbro: Dante e i poeti della ‘Commedia’ (Bollati Boringhieri, 1993). Her next book, The Undivine Comedy: Detheologizing Dante (Princeton, 1992), looks at how Dante constructs a virtual reality in language in the light of his repeated truth claims, and sets out a method of reading – “detheologizing” – that counteracts the narrative structures that work to overdetermine our hermeneutic response to the poem. Dante and the Origins of Italian Literary Culture (Fordham, 2006) explores the origins of Italian literary culture through four prisms: “A Philosophy of Desire”; “Christian and Pagan Intertexts”; “Ordering the Macrotext: Time and Narrative”; and “Gender.” This volume won the Premio Flaiano in Italianistica in 2007. Professor Barolini’s commentary, Rime giovanili e della “Vita Nuova” was published first in Italian (Rizzoli, 2009) and subsequently revised and translated into English as Dante’s Lyric Poetry: Poems of Youth and of the “Vita Nuova” (Toronto, 2014). A collection of sixteen new essays, Dante’s Multitudes: History, Philosophy, Method, was published by Notre Dame University Press in 2022.

Professor Barolini continues to work on her Commento Baroliniano, her “ovra inconsummabile”. While she considers the commentary to Inferno finished, she has yet much work to do on Purgatorio and Paradiso.