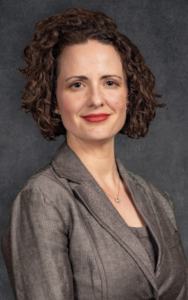 Kristina Olson is Associate Professor of Italian in the Department of Modern and Classical Languages at George Mason University and Associate Editor of Digital Dante. Her research investigates the intersection of history and literature in the works of medieval and early modern Italian authors, paying particular attention to matters of language, gender and reception. She is the author of Courtesy Lost: Dante, Boccaccio and the Literature of History (published by University of Toronto Press in 2014); the co-editor of Boccaccio 1313-2013, published by Longo Editore in 2015; and several articles on Dante, Boccaccio and Petrarch, as well as the artist Sandow Birk. Together with Christopher Kleinhenz, she edited a second edition of the MLA volume, Approaches to Teaching Dante’s Divine Comedy (2020). She serves as President of the American Boccaccio Association (2017-20).